During remodeling to change the Jewish temple into a functioning restaurant, a deliberate effort was made to preserve the style and atmosphere of the original building. The stained-glass windows are the originals, but are now protected by shatter-proof glass on the outside.

Inside, the loft chandeliers are refurbished from the synagogue. The wood floors are the same Eastern Kentucky pine installed in 1891, and have simply been sanded and refinished. Of course, some changes were necessary. The bar now stands in the original pulpit area, but even there some of the original building is preserved.

In keeping with the decor, the wood is poplar and the glass is etched in a diamond pattern to match the design of the stained glass windows. Booths and tables were custom made with wood and fabrics chosen to compliment the colors of the windows.The building at 120 West Maxwell Street that now houses Joe Bologna’s Restaurant has an old and unique history.

Along with the adjoining property, it is listed on the National Register of Historic Places. The land, on the corner of Maxwell and Lawrence Streets, and between South Upper and Limestone Streets, was purchased in March, 1890, by the congregation of the First Presbyterian Church of Lexington. It was dedicated on April 17, 1891, as the Maxwell Street Presbyterian Church. By August, 1891, they had erected a “handsome brick church, trimmed in stone, lighted by gas, heated by a furnace and furnished with modern pews, capable of seating comfortably four hundred worshipers” (The Church Record).

The original cost was $7,000.00. Church membership expanded from its original 75 worshipers to 250 in 1896. The congregation eventually outgrew the building and decided to move. In April, 1912, it was sold to the Ohavay Zion congregation.

In 1914, it was rededicated as the Jewish synagogue in Lexington starting with just twenty-five members.

The congregation’s growth resulted in a social hall being added in 1941 and a school in 1964. However, the original structure remained largely unchanged.

One of the reasons the Jewish community chose the site was religious rules prohibiting riding or driving on the Sabbath. In 1912, when Ohavay Zion purchased the building, its members lived within walking distance. However, by the 1980’s, many of the membership of 150 families had moved out to the suburbs and temple leaders decided to follow the trend. The synagogue, social hall, school and adjoining commercial buildings were sold in August, 1986, to Kaufman  Properties the current property owner.

Old & New – A Tradition Begins In 1989, upon moving into the complex renamed Maxwell’s Alley, Joe Bologna’s Restaurant and Pizzeria became the first restaurant in Lexington with 41 stained-glass windows. During remodeling to change the Jewish temple into a functioning restaurant, a deliberate effort was made to preserve the style and atmosphere of the original building.

The beaded board poplar wood that partially covers the wall and ceiling area is of the same type as the original outer doors. Completely new is the loft, added to increase dining capacity.

The dominant feature of this Victorian Gothic brick structure, also used for Joe’s new logo, remains the huge eighteen foot tall stained-glass window facing Maxwell Street. Whether looking down over a religious congregation or restaurant diners, the beauty and quality of the window add elegance and artistry to this fine old building.

We hope you enjoy your visit and for those interested, there is additional information featured in a wall display in our Alley entry. 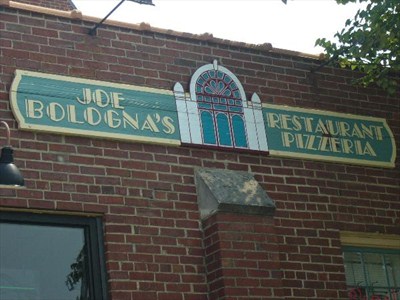 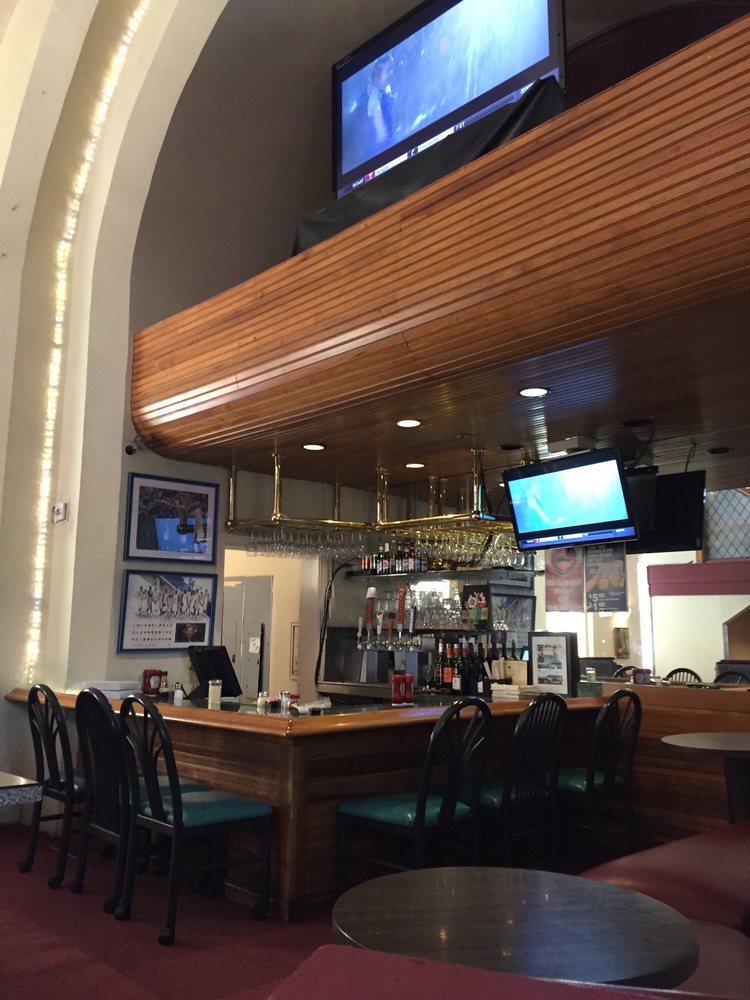